Sri City, December 29 : A large team of participants of the Jagriti Yatra, an ambitious train journey of discovery and transformation aimed at taking highly motivated youth on a national odyssey to meet the role models – social and business entrepreneurs – of the country, visited Sri City on Sunday. Nearly, 450 participants from all over the country are taking part in the pioneering expedition. Mr. P. Mukunda Reddy, Director, Sri City extended a warm welcome to the Yatris, and Mr. C. Ramesh Kumar, Vice President (Customer Relations), Sri City gave a brief presentation on the unique features and status of the industrial park.

Thanking the Managements of Sri City for giving the opportunity, Mr. Sharat Bansal, Chairman, Jagriti Yatra said,”Sri City Mega Industrial park, which is unparalleled in the country, and every year we find it ‘breaking new ground’. All the participants of the Yatra find their visit to this place truly inspirational.”

Annotating on the visit, Mr. Ravindra Sannareddy, Founder Managing Director, Sri City said “It is a great pleasure to have the Jagriti Yatra team in Sri City. In fact, they are visiting for the 4th consecutive year, as Sri City emerged as one of the mega industrial parks in the country that are fuelling India’s ambition of becoming a manufacturing hub, giving a fillip to creation of jobs and getting the economy on the fast track, in line with ‘Make in India’ and ‘Make in AP’, the dream campaigns of the Central and State governments respectively. I am confident, this expedition would prove to be life-transforming journey for the participating youth, and I congratulate and wish all the Yatris a very prosperous future.

Following the briefing session, all the participants of yatra went round the Business City and witnessed the available world-class industrial infrastructure. As evident from their feedback, they are thrilled at the vastness of the mega industrial park.

Jagriti Yatra, which was launched in 2008, as a journey of social awakening, is being continued every year, and this year’s yatra is the 12th consecutive one. The yatra that covers about 8000 kms., across the length and breadth of India in 15 days, commenced from Mumbai on December 25. This year the team included a group of 18 young entrepreneurs from the Union Territory of Jammu and Kashmir. The yatra covers 12 cities/towns/villages of India, viz., – Mumbai, Hubli, Banglore, Madurai, Sri City, Vishakapatnam, Ganjam, Nalanda, Deoria, Delhi, Tilonia and Ahmedabad. The participants (yatris) were shortlisted from a large number of applicants. They are all in the age group of 20-27 years. During their visits, the yatris will meet and interact with 15 role models/change-makers/leaders who started out on a journey and made a difference to thousands of lives. 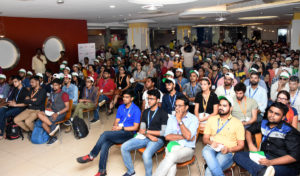