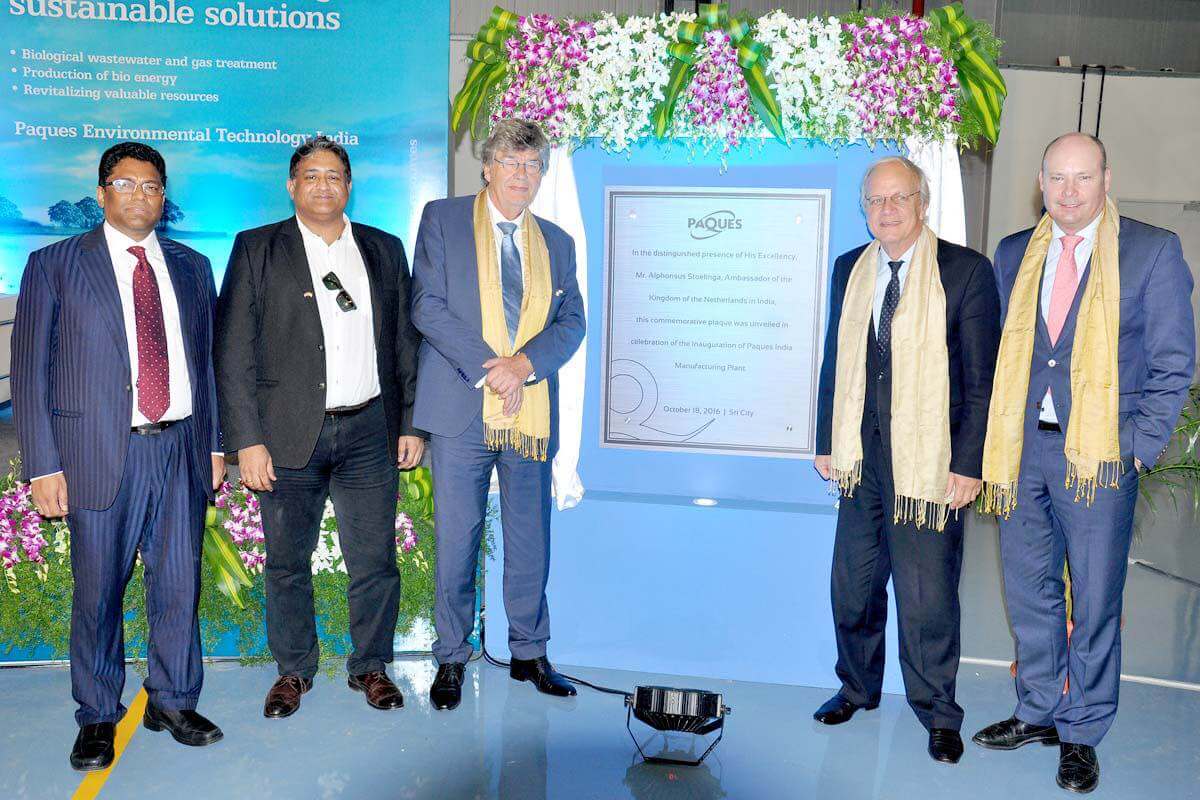 Mentioned that the trade relations between Dutch and India have been existing for past four centuries, Mr. Stoelinga said, “The Netherlands is today India’s fourth largest trading partner in the European Union and one of the top five investors.” Stating that in recent years the value of mutual trade has risen enormously, he added,”There are 115 Dutch companies which have their presence in India, and Netherlands too attracts most of the out-bound foreign direct investments from India.”

Wishing all success to Paques, Mr. Stoelinga mentioned that its products will be in demand in Indian market due steep in crease of economic activity that led to the need for water conservation.

Stating that Paques is very close to my heart Mr. Ravindra Sannareddy said,”As an environmental engineer, I was very keen to have Paques here as it is the leading brand in the field of green-energy. I am sure, their presence will certainly strengthen our mission of building a ‘clean & green’ City.”

Congratulating the Paques team Mr. Sannareddy mentioned that in Sri City, Paques is the 2nd company from Netherlands. “With the advantage of a Special Economic Zone with a contiguous Domestic Industrial Zone and Free Trade Warehousing
Zone, Sri City will felicitate exports also.”

Mr. Stephan Bocken said,”Paques India already executes large orders in the Pulp & Paper, Food & Beverage and Petro Chemical sector in India. With this “Make in India” initiative, Indian industries and municipalities will have access to advanced and innovative robust technologies, which help them to reclaim energy from the source – wastewater and biogas.”

The new subsidiary Paques Environmental Technology India Pvt. Ltd. is the fourth and most modern sales/production site of Paques. The new plant, with an approximately 2500 square meters area, and commissioned with an initial investment of Rs.30 crores on a plot of 2 acres, will manufacture core components for the reactors that treat waste water and gas. It will supply its products, besides India and the SAARC region, to customers across South East Asia, Japan, Vietnam etc.,

The company has plans for expansion of the unit based on the pace of business, particularly exports. To start with, the plant will provide employment opportunity for about 30 highly skilled persons to make core components, which essentially involved high-end engineering plastics, and this number might go up to 50 in future.

Integration of water purification, sustainable energy generation and reuse of resources is becoming more and more essential, and Paques, as a market leader in the field of green energy has been developing cost-effective purification systems that reduce water and carbon footprints and reclaim valuable resources. It is one of the few major firms in the world which uses anaerobic technology for waste water treatment, in which the bacteria would convert organic compounds (COD) to bio-gas in an environment without oxygen, which is a green energy technology. It has more than 2000 installations in 60 countries, across different industries.

Besides the Global and European headquarters in The Netherlands, Paques has regional headquarters in China, South America, India, South-East Asia and North America. This ensures local presence and the best service for clients worldwide.