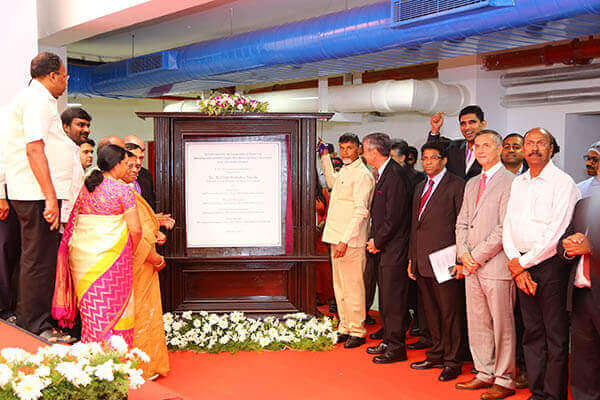 Speaking on the occasion Mr. N Chandrababu Naidu said, “We’re delighted that one of the world’s largest food companies preferred Sri City for setting up its largest facility in Asia Pacific in Sri City.”

Appreciating the vision and hard work of Ravindra Sannareddy and Mr. Sriniraju in transforming the area into a model industrial park, Mr. Naidu said,”I have no doubt in stating that Sri City would emerge as one of the best model in the world”. He said that both Mondelez and Sri City are lucky, as the former got world-class infrastructure support, the later could get investment from world’s largest chocolates company.”

Commenting on the occasion Mr. Ravindra Sannareddy said,”We are very happy as Sri City has become the home for Mondelez’s largest plant in Asia-Pacific. We are particularly happy as the plant would improve employment opportunities to locals. A large number of farmers in Chittoor district would also be benefited, as the company uses huge quantity of milk, in addition to huge quantities of sugar for producing their products. This in turn, will lead to economic sustainability for farmers and an assured regular supply of the precious raw material to the company.”

Mr. Chandramouli Venkatesan, Managing Director, Mondelez India Foods Private Ltd., said,”Our multi category manufacturing site will serve both India and regional markets, and we would like to thank the government of Andhra Pradesh and Sri City for their excellent support.”