Addressing the graduating students, Dr. C. Rangarajan said, “The importance of higher education in building up a nation is well recognised today. The agricultural, industrial and scientific growth of this country depends upon creating a corps of well trained professionals in these areas and this can happen only with good quality higher education. It is here institutions like IFMR come in and play a crucial role.”

Declaring the convocation inaugurated, Dr. N. Vaghul, Chairman, Board of Governors, IFMR said, “I would like to congratulate all the students who are graduating today. As they step forward towards their career growth, I am positive that our students will carry their learning to their professional lives and enrich their workplaces with their achievements.” 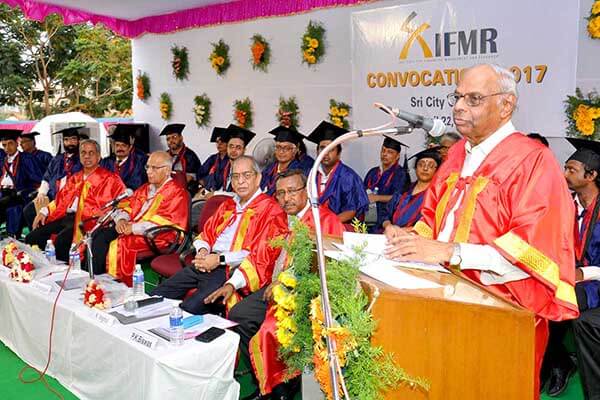 Dr. Rangarajan gave away awards to students who had demonstrated academic prowess, leadership skills, and all round excellence through the year. Awards were presented to distinguish alumni from various batches and programmes. 179 PGDM (Full-Time) Students and 2 PhD scholars were awarded the graduation certificates.

The event started with the welcome address by Dr. C V Krishnan, President, IFMR. Prof. P K Biswas, Director, IFMR while presenting the annual report of the institute, mentioned that students have got 100 percent placements in top companies through campus recruitment with high salaries. Prof. T. N. Srinivasan, Member of IFMR Board was also present in the function.

A not-for-profit society, the Institute for Financial Management & Research (IFMR), is a leading business school with the objective of moulding ambitious young men and women into competent and socially responsible organisational leaders in a global setting. IFMR currently offers full-time PGDM programme, PhD programme and open and customised management development programmes. IFMR has been ranked all-India 22 in The Hindu Business Line- MBA universe annual B-School ranking 2016-17 and was also ranked 38 among all management institutes in India in the Government of India- Ministry of Human Resource Development’s National Institutional Ranking Framework (NIRF) ranking for 2017. IFMR also bagged the 2016 MMA Award for Managerial Excellence and also bagged the IMC Gold award for IFMR’s Institutional Leadership Efforts in strengthening the research eco-system during the 7th Indian Management Conclave 2016 held at IIM-Ahmedabad. IFMR has recently received the letter of intent from the Andhra Pradesh State government for a Private University.