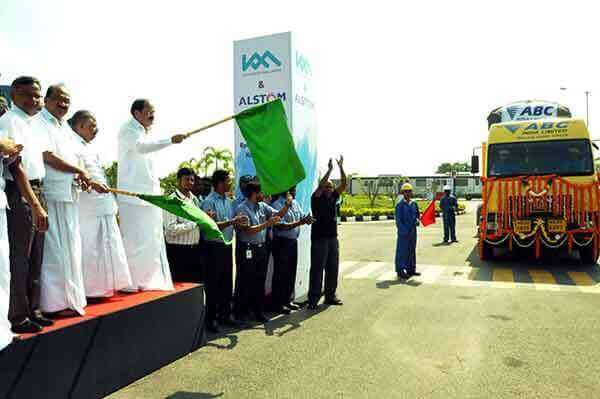 Addressing the gathering Mr. Venkaiah Naidu appreciated the works of Alstom and said, “Kochi Metro rolling stock are the fastest delivered coaches for any metro project in this country with most modern design and advanced technology.”

Complimenting the growth of Sri City he said, “With the presence more than hundred MNCs, Sri City stands as a true manifestation of the government’s ‘Make in India’ vision.”

Mr. Venkaiah Naidu urged the chiefs of industrial units to create employment for the youth in the neighbouring region, and requested them to take up good projects benefitting the villages under corporate social responsibility.

Commenting on the occasion, Mr. Ravindra Sannareddy said,”We take pride in the fact that Alstom Transport India is supplying the very first set of ‘Made at Sri City’ coaches to Kochi Metro Rail project.

According to Alstom, the coaches for Kochi Metro Rail are one of the most cost-efficient coaches, and are the first ‘make in India’ coaches, designed and manufactured in Sri City. Alstom was awarded a contract to supply 25 state-of- he-art Metropolis train sets to Kochi Metro, and now the first train sets is ready for delivery. As per the contract, Alstom is responsible for the design, manufacturing, supply, installation, testing and commissioning of 25 standard track gauge trains. Each train will be composed of 3 cars, about 65 m long and with a capacity to carry up to 975 passengers.